So while eating our King Cobra Snake (post to come..promise)
our servers attempted to up sell us on a local specialty.. 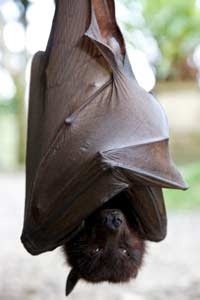 I'm sure someone on television has already taped an episode eating one of these creatures.. describing the taste and texture. (refer to one of those)

I passed.. this bat was freaked out.. and when it started defecating it became too much...even for me.

If we had been hunting and shot it.. that's one thing..
this was another.


Apparently eating bats are good for the male libido... but this seems to be the case for most anything in Vietnam.

In places like Guam the eating of bats have been linked to causing SARS!! yikes!

Posted by the Butcher's Daughter at 2:36 AM

the Butcher's Daughter
my Home:
Employees Only - www.employeesonlynyc.com