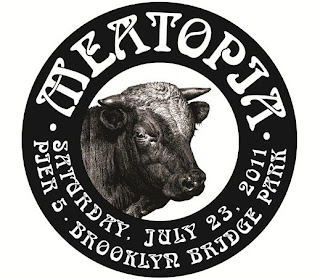 This July I'll be cooking at Meatopia!
Tickets just went on sale..

An outdoor festival of meat held on the water in Brooklyn.
Lots of great chefs.. Lots of meat!

I love a dish that starts somewhere and goes on to take over the world..
Each culture putting their own mark on it.

I love Schnitzel and so do all these places..

The original dish has its roots in Viennese cuisine, originally called Wiener Schnitzel in Austria.
It's Veal pounded really thin. coated in breadcrumbs and served with a lemon wedge.
It can also come with a Sardine filet, capers and either potato salad or potatoes with parsley and butter.

In Germany and Austria Wiener Schnitzel is protected by law to always be made from Veal.. so if you'd like to use Pork you'll have to call it something different..

Of course someone else would like to take responsibility for such a tasty creation.. there have been rumors since the late 1800s that Milan was the birth place of this perfect dish.

Whoever invented this.. we are all glad they did!

Schnitzel has evolved to include just about any meat pounded thin and breaded.
From Chicken to Pork..to Peasant to Alligator.

And can be accompanied by garnishes like Eggs, Plantains, Melted Cheese, French Fries, or Pasta. 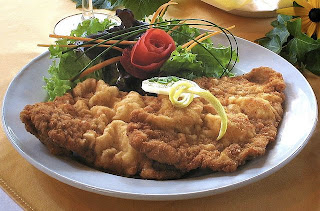 I like mine with Mashed Potatoes and Lemon..
Posted by the Butcher's Daughter at 11:23 AM 2 comments:

the Butcher's Daughter
my Home:
Employees Only - www.employeesonlynyc.com